A Guide to the Inman Aligner

Home A Guide to the Inman Aligner

If you’ve spent any time looking at the articles on the Inman aligner, you’ll have begun to realise that there are lots of different treatments available for people who want orthodontic work. Bewildering, isn’t it? Probably, you’ve begun to think that, with so many products, many of which are expensive, uncomfortable and long-term, wouldn’t it make sense for someone to make a fast, cost-effective alternative. Surely there is a gap in the market?

You might be onto something there. Ideally, this new product would be an exciting innovation using the latest materials. It would be perfectly tailored to patients who require some simple alignment work (mainly for cosmetic reasons), but don’t want the hassle of a lengthy orthodontic procedure.

The more you talk about it, the more convincing it sounds. Did you know, research says that around 70% of the population would see benefits from orthodontic work? But how many of those people have the time, money or inclination to go through with it? What you need is a quick fix – one that lasts.

So what’s the solution?

For many people, the solution to this gap in the market is the Inman Aligner. According to the Inman Aligner corporate website (www.inmanaligners.co.uk), it has been called the ‘’greatest innovation in cosmetic dentistry since the porcelain veneer’. Who called them that it doesn’t actually say – but there is certainly no doubting that this is an interesting new product in orthodontics.

What is the Inman Aligner?

The Inman Aligner is a simple, hassle-free way of straightening your front teeth. No complicated descriptions. No medical jargon. Just something that does exactly what it says on the tin. In the past, anyone who had crooked teeth had only a few options – and all of those options took time. What’s more, if you didn’t like the idea of having brackets attached to your teeth for months and months, then you were probably stuck with your crooked teeth.

Which all goes to show why the Inman Aligner has been greeted with such rapturous expectation.

How does it work?

In order to correct your dental problems, the Inman Aligner utilizes a coiled Nickel Titanium spring to create force on the inside or the back of your teeth. The bar that runs across the front of your teeth, on the other hand, is designed to squeeze your teeth into position. Since the bar is continually pulling and pushing your teeth into place, the treatment time necessary with the Inman Aligner is usually shorter than the treatment time needed for other types of invisible braces. 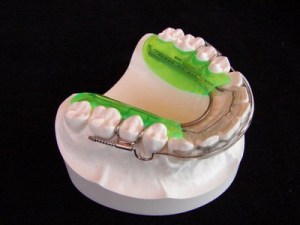 But does it live up to all the hype?

As with most products, it’s a fantastic revelation if it is the right product for you to begin with. The Inman Aligner is suitable for adults and older teenagers who need mild orthodontic work. In particular, it is often recommended to adults whose childhood orthodontic work has relapsed and they need a slight correction. On the other hand, if you need some more serious work done, then you would probably be better choosing a longer-term treatment.

That said, the Inman Aligner does produce impressive results for the right sort of patient. Most patients can be treated in six to 14 weeks – compare that to 2-3 years for traditional braces and you can see what a step forward this is. Simple cases can even be completed in 4 weeks.

Another attraction of the Inman Aligner is that it reduces the number of visits you need to make to the dentist and the time you have to spend there. Typically, getting your Aligner fitted will involve four trips to the dentist of around 15 minutes each.

How does it look?

Created by Florida dental technician Don Inman, the aligner is similar to a gumshield, except that the acrylic casing that covers the teeth is transparent and can hardly be seen. It is also comparatively comfortable to wear. Dentists recommend that you wear it for 16-20 hours per day, removing to eat or sleep for example. Alternatively, you can also remove it for job interviews, family photographs – you name it. It makes sense for people who need a more versatile orthodontic solution.

What are the alternatives to the Inman Aligner?

Traditional braces are one alternative, but as we mentioned, they take longer. You could also look into ‘invisible’ braces, but they also tend to cost much more.

The Inman Aligner provides a middle ground to the two extremes of braces and veneers, rather than simply an alternative. For many people, braces are an unnecessarily lengthy treatment while veneers, on the other hand, are purely cosmetic. Another disadvantage to veneers is that teeth will often need to be shaped before the veneer is placed on top of them, so some heavy grinding can be involved.

The Inman Aligner actually straightens your teeth, rather than simply covering them. Yet it doesn’t take as long as other orthodontic techniques. Of course, the Inman Aligner can also be used in tandem with other treatments. For example, it has been used to realign teeth before veneers are applied for that perfect, finishing touch!

How do I know if it is the right product for me?

The best option will be to discuss it in detail with your dentist.

Is this a trend that will disappear again next year, then?

No, it is a proven technique. Patients have been treated with the Inman Aligner since 2000.

How much does the Inman Aligner cost?

As usual, it’s difficult to give anything more than a ballpark figure for dental treatment. Every patient needs to be assessed individually and any products that a dentist recommends should form part of an overall oral health strategy.

However, the Inman Aligner is designed to cost less than other orthodontic treatments because it aims to fill a specific gap in the market. People with milder conditions have in the past decided to live with their crooked teeth rather than spend a small fortune on lengthy treatment. Now, they have the option of the Inman Aligner, which normally costs between $2000 to $2500.

Will I need to wear a retainer to keep the teeth straight?

As with any type of orthodontic treatment, you need to hold the teeth in the correct position to reduce the chances of unwanted movement. This is usually done with either a thin wire bonded onto the back of the teeth or a slim, transparent plastic retainer which can eventually be worn for just two nights per week.

More information on the Inman Aligner

Dental On Park is headed by Dr. Tina Tavakol- BDSc. (Dentist) (Qld.) She is a member of the Australian Dental Association, is a Certified Invisalign Practitioner, Certified Inman Aligner Practitioner and Certified MDI Mini- Implant Practitioner. She is also a visiting dentist at St. Andrews Hospital in Spring Hill. Dr. Tvavakol prides herself for providing thorough comprehensive dentistry that pays attention to detail. Thoroughness - she insists - helps patients maintain their teeth for a lifetime at minimal cost.'